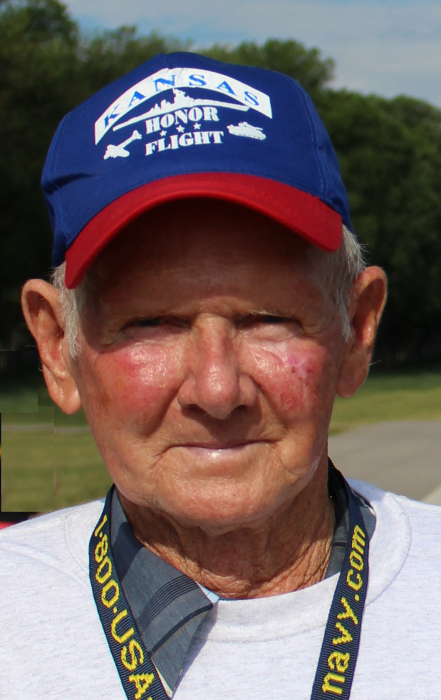 God called Leo Edward Hultgren to his heavenly home on May 23, 2020 at the age of 87 years old. Leo was born to George and Lillian (Pearson) Hultgren on January 8th 1933. He spent all but 7 years of his life in rural White City. Leo attended one room schools at Kitchen and Highland prior to graduating from White City High School in 1951. He enlisted in the Navy in 1952 and served on the USS Bryce Canyon destroyer tender until his discharge in 1956. He enjoyed his time in the Navy and developed lifelong friendships. After returning from the Navy Leo attended college at K-State and found college wasn't for him.  He went to work at Boeing in Wichita and worked there until 1959. During his time in Wichita he met the love of his life, Nellie Ball, on a blind date. He and Nellie married in Wichita on February 21, 1959.  Leo brought his bride back to the farm life and they made their first home 3 ½ miles south of White City. Leo joined his father farming and milking on the Grade A dairy until 1966 when his parents retired, built a home in town and moved to White City. Leo and Nellie moved the family to the home place and took over the farming and the dairy operation.  Leo belonged to the Teddy L Wilde #299 American Legion Post and the White City United Methodist Church. He coached baseball and helped organize the baseball association. Many patrons enjoyed breakfast cooked by Leo at the American Legion which he did for over 15 years.  He continued this activity until he began experiencing issues with his health. Leo served on the administrative council at the church and was in charge of the men's annual breakfast for 20 years. He also served various terms on the Morris County FSA Board. Leo was incredibly proud of every member of his family and nothing gave him more joy than having them home. Meals always began with the entire family gathered, hand in hand, while he gave thanks for all blessings. As a lifetime farmer Leo continued to do what he loved all his life. He enjoyed sharing produce from the garden and he loved mowing. One of the most recent accomplishments was the creation of Lucky 7 Park. A small clearing in the timber where family members worked to remove trees and brush. Grass was planted and small walnut trees were nurtured. The family agreed the park would be called Lucky 7 after the 7 children. Leo was so very proud of the Lucky 7 Park and invited all to enjoy it. The annual community hog roast held at the park to bring the local and surrounding communities together for fellowship was already being planned and Leo recently set the date for 2020.   Leo was preceded in death by his parents, George and Lillian Hultgren, one brother Eugene and 2 sisters Edna Mae Joy and Doris Roberts. He is survived by his wife of 61 years, Nellie, and 7 children, Sheila Rae (Jeff) Burns, Wayne Edward (Christy), Teresa Marie (Robin) Champlin, Kevin Allen (Marlo), Gaylene Ann Clayton, Connie Sue (Ryan) McDaniel, Brice Lee (Nancy); 13 grandchildren, Jessica Anderson, Kristen (Bryson) Wheeler, Sarah (Aaron) Powell, Brian Hultgren, Derek (Lacey) Champlin, Dana (Derek) Sandmann, Kara (Hans) Burken, Paige (Ryan) Mortimer, Erin Hultgren, Kyle Hultgren, Zachary Schultze, Marissa Schultze, Chole (Rylee) McDaniel;17 great grandchildren, Miah, Riyan, Taygen, Haeley, Ashlynn, Carter, Ethan, Gage,Taya, Hayden, Chase, Hayes, Jensen, Halley, Wyatt, Scout and Karsyn; sister, Erma Anderson (Delbert); brother, Wilfred Hultgren (Vivian) and brother-in-law, Carrol Joy. Memorials may be made to the United Methodist Church White City/Breezeway Project in care of Sawyer Funeral Home, PO Box 273, Council Grove KS 66846 Celebration of Life to be scheduled at a later date.
To order memorial trees or send flowers to the family in memory of Leo Hultgren, please visit our flower store.