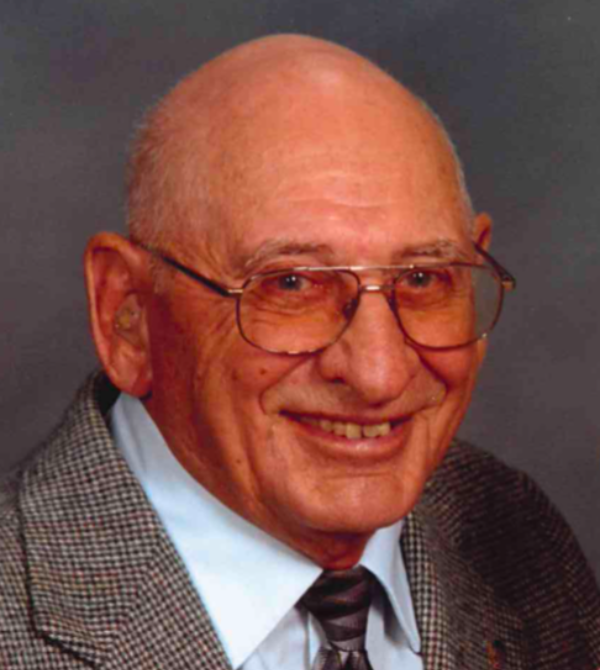 At the age of twenty-one, Carrol volunteered to serve his country in World War II, from January 1942 until October 1945.  He was a staff sergeant in the Army Air Corp, in the 514 Squadron/406 Fighter Bomber Squadron.  The Squadron flew support for the D-day landings, and they arrived as a group in France on Omaha Beach. Later in the war his squadron participated in the Battle of the Bulge. As a crew chief for the P-47 Thunderbolt, his plane flew 115 missions without an abort.  Carrol was awarded the Bronze Star, ETO Ribbon, two presidential unit citations, and the good conduct medal.  After an honorable discharge he served in the reserves for three years.
Carrol married the love of his life, Edna Mae Hultgren, on her 21st birthday, in the White City Methodist Church parsonage, on January 30, 1949.  They were married for nearly 64 years until her passing on November 3, 2012.  They had four children. He was a loving husband, dad, grandpa and great grandpa.  Carrol farmed for many years, and also was a Prairie Valley Seed dealer.  He was a member of the Simpson United Methodist Church, American Legion Post 71, and served on the board of the Alta Vista Senior Center. He and Edna Mae enjoyed traveling to many WWII reunions.
Carrol was preceded in death by his parents, wife Edna Mae, sister Hope Jacobs, brother Wyeth Joy, nephews Dennis Jacobs, and Tad and Brent Joy.  Survivors include children Linda (Duane) Peter, Gary Joy, Cathy (Jerry) Hutchinson, and Sharon (Ron) Brown.  Grandchildren, Holly, Daniel, Dustin, John, Carrie, Matthew, Rachel, Hannah, Sarah, Garry, and Geoff, and twenty great-grandchildren, niece Gloria Smith, and his cousin Shirley Blosser.
A celebration of life service will be held at 10:30,  Monday, May 2, 2022 at Simpson United Methodist Church, Alta Vista, KS.  A visitation will be held, Sunday, May 1, at the Sawyer Funeral Home in Council Grove, from 4-6pm.  Burial will be at the Alta Vista Cemetry with full military honors.   Memorial contributions are suggested to Simpson United Methodist Church or the Alta Vista Senior Center.
To order memorial trees or send flowers to the family in memory of Carrol R. Joy, please visit our flower store.